Just saw this posting about the Pentagon on September 11, 2001; one of those stories of valor, discipline and American know how that never made it to ABCNNBCBS, the wholly owned media arm of the party of slavery, the modern Demo party.

Who best to protect our children?  Marines or Maxine Waters, the Military or Cecile Richards?

AFTER FLIGHT 77 HIT THE PENTAGON ON 9/11, THE FOLLOWING HAPPENED.

A daycare facility inside the Pentagon had many children, including infants who were in 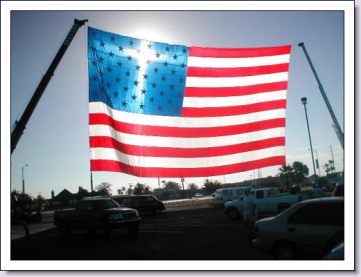 heavy cribs. The daycare supervisor, looking at all the children they needed to evacuate, was in a panic over what they could do.

There were many children, mostly toddlers, as well as the infants that would need to be taken out with the cribs. There was no time to try to bundle them into carriers and strollers.

Just then a young Marine came running into the center and asked what they needed. After hearing what the center director was trying to do, he ran back
out into the hallway and disappeared. The director thought, “Well, here we are, on our own.”

About 2 minutes later, that Marine returned with 40 other Marines in tow. Each of them grabbed a crib with a child, and the rest started gathering up toddlers.

The director and her staff then helped them take all the children out of the center and down toward the park near the Potomac ..

Once they got about a third of a mile outside the building, the Marines stopped in the park, and then did a fabulous thing — they formed a circle with the
cribs, which were quite sturdy and heavy, like the covered wagons in the Old West.

Inside this circle of cribs, they put the toddlers, to keep them from wandering off. Outside this circle were the 40 Marines, forming a perimeter around
the children and waiting for instructions. There they remained until the parents could be notified and come get their children.

The chaplain then said, “I don’t think any of us saw nor heard of this on any of the news stories of the day. It was an incredible story of our men there.”
There wasn’t a dry eye in the room.

The thought of those Marines and what they did and how fast they reacted; could we expect any less from them? It was one of the most touching stories from the Pentagon.

It’s the Military, not the politicians that ensures our right to life, liberty, and the pursuit of happiness. It’s the Military who salutes the flag, who
serves beneath the flag, and whose coffin is draped by the flag.

If you care to offer the smallest token of recognition and
appreciation for the military, please pass this on and pray for our men and women, who have served and are currently serving our country, and pray for
those who have given the ultimate sacrifice for freedom.

ON 11-9. THE HOLLYWOOD FREEWAY WAS FILLED WITH PROFESSORS AND COLLEGE STUDENTS.  The day after Ma Clinton lost the election by her own, not the Russkies, listless effort and power, the radicalized regressive leftist professors of various LA universities incited their students to do stupid:

500 or so, following the professor and professional Soros anarchist leaders, played the Roadkill Game, becoming targets for 18 wheelers and cars on the Hollyweird 101 Freeway.

Whining, sobbing, sucking on pacifiers like lifelong day care kids, these tantrum throwing toddlers needed the DC Marines to remind them of whom they are: incapable of free thought, endangering themselves and others, whining about the “peaceful” transfer of civilian power, but if the Marines had shown up, the tyrannical professors would have stirred the pot even more.  Complain about patrimonial military industrial complex interference with free speech and professor tenure.  I’m all for free speech on campuses and in teacher’s lounges; but not bullying because you can’t defend your point of view.

11-9 was my second or third 9-11: the radicals have occupied academia and our children’s 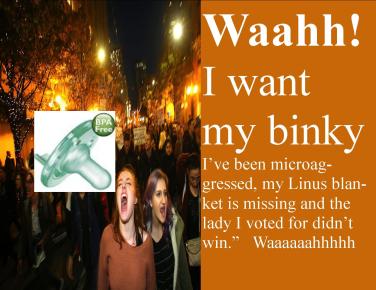 minds for over 5 decades, and most of our politicians lack the character to stop the destruction of the next generation and our country.

Simple truth is, we adults need to act like adults yet again, demand accountability and stop the incestuous occupation of college instruction by radicals from the 60s in Depends.

If you want to protect the children, don’t call the kidbuster Cecile Richards, with two billion notches on her gun belt, and counting, and planned parenthood: Call the Marines.

If you want to divide a tall pile of shit and a trash bag full of hot air: call regressive Leftist professors like “dr’ Weide of CalState LA, teen abuser Miller-Young of UCSBGoleta, MNichols of UCLA or CSUFullerton’s famous woman abuser E Canin.  They are happy to comply.

This foursome could divide the crap AND the hot air equally.  All but Canin are tenure protected.  The Marines?  They earn their $8 an hour, put their lives on the line and when the kids are in trouble, they come through.

Those on the Hollywood 101 Freeway: pray they get their daycare graduation cert soon so they can start being an adult.