Moms: this one’s short and G-rated!  Happy St Patrick’s Day!  What a day for green, parties, shamrocks, hats and beer.  Green beer?  Lots of it in New York, in the bellies and on the sidewalks.

But Maewyn Succat or Patrick, kidnapped at 16 from the British mainland and shipped to Ireland as a slave, is the perfect success story for an increasingly cynical world.

Yes it IS a great day to be alive!!  After six years of prayers and shepherding a mountain flock, he had a dream to escape back to Britain.  “No longer a slave, I call you friend” are words uttered by one leaf of the shamrock, Jesus; Patrick studied at many European monasteries (like our Norbertines in Trabuco Canyon beginning their new digs) before becoming priest and bishop.  Pope Celestine sent this former slave and sheep shepherd to shepherd humans, ie evangelize England.  Then Ireland. 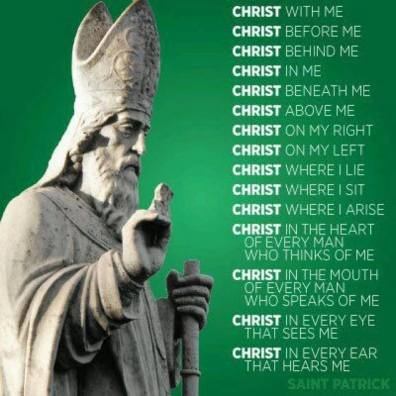 Born in Scotland between 387-390 as Maewyn Succat, Ireland is where we catch up to Patrick the preacher.

St Augustine struggled with the Trinity, how to understand and demonstrate this central truth of the Catholic/Christian faiths.  He picked up a green three-leaf clover, and used it as a way to show the pagans of yore that God is three distinct persons in one Godhead, never born always existent.

Pagans and faithful today struggle with the same inability to understand this Truth of the Cosmos; today, most shamrocks are vaccinations of getting pinched on March 17th, instead of a reminder our ETERNITIES are in the balance, calling us to believe in the Christ, His Dad/Father and the Spirit.  It’s easier to understand the 553 sextillion miles of universe, than grasp completely the God of that same expanse of space, time and love.

God went one better: when He designed the universe, the billions of stars, galaxies and plants, planets, animals, one man & one woman, He also made biochemicals and millions of processes to run the 35-100 trillion celled humans.

First, He made Light, in His own Imaginations;  think about this: there are unlimited numbers of Primary Numbers, but how many Prime or Primary colors?   3!

Break out your prisms.  Red, blue and yellow, distinct personages of pure color three, when you combine them, you get pure white light.  3 Persons in the Godhead; 3 personifications of different colors in the Lighthead, so to speak.  God is the absence of darkness; so is pure light!

Next time at Mass (Catholics), Service (Protestants), Synagogue (Jewish), Mosque (Muslims), Gym (resolution keepers) or ?, realize God leaves NOTHING to chance: He wants you or to recruit you to live happily forever.  Your choice of course!

At Mass, we hear “Light from Light, True God from True God”; ask a Cathedral full of learned theologians to explain the Trinity.  After three hours of pontification, a little 10 year old will tug at your purse or jacket and say “Daddy, mommy, I was told we can’t understand the Trinity at school.  St Augustine watched a little boy like me try and fill the ocean into a hole he had dug and laughed.  But the little boy had the last laugh: ‘augustine, it would be easier for me to fill this hole with the whole ocean, then for you to understand the Trinity.  The ‘angelic’ boy vanished.  With his pail.  Daddy, can we go to the beach today?”

The fine, learned pontificators of theology will think a moment and finally agree.  We can’t.  But Patrick tried and was successful in another way; he showed signs and miracles including ridding Ireland of snakes, cheerfully showing the Druids they were in error.

Mary only took 10 years as Our Lady of Guadalupe to convert 9 million Mexican people; Bishop Patrick, over 33 years, converted most of the Green Isle.    Slave to shepherd to catalytic converter of souls.

He died at Saul, County Down naturally between 461-464.  Did God really design the Universe to help mankind and womankinders to know, love and serve Him?  Whattya think?

Just days ago, on 3-14, we irrationally celebrated an infinite number eating lots of Marie Callendar’s pies. Recall, Pi is 3.1415926535etc.; the etc because it is infinite.

God planted this number Pi, like the golden mean and others, in His design for the Catholic relic, the Great Pyramid (GPG) of Egypt called out in Isaiah 19,19-20.  Sorry Katie, i wasn’t there to prove if God or man made this 13.6 acre structure, the last of the wonders of the world.  But, it was built on the exact center of the world (longest land meridian intercepted by longest parallel N-S, E-W, no simple feat on a stone granite flat mountain. Cornerstones built with balls and sockets to withstand expansion; except NO top cornerstone.  It is visually a four sided pyramid, but actually an eight sided (Jesus number is 888) that matches the contour of the 10 million meter earth surface.  God designed it with 144,000 mirror capstones that became HomeDepot building supplies after a 6th century earthquake. Once a mirrored beacon, on the first day of spring (coming soon), at high noon, it has ZERO shadow.  This would have maximized the amount of light, only object visible from the moon.

Almost done, readers: Dads and moms: have your kids Google Earth pyramid of giza and swoop in for a closeup.  In real time, you will see, even today it still lines up perfectly with the points of the compass.  The Christ angle (26 degrees etc.) is the same as the passageway designed into the pyramid; laid down across the horizontal to the east, the line runs remarkably through the twin solomoic pillars (The Exocus enttry point) AND the House of Bread or Bethlehem.  Stand on the pyramid on spring day 1, the sun rises over Bethlehem.   “Come on Beckman you’ve had too much green beer!”  Nope, nada. Here’s the final clues:

Point is, just as Patrick used a part of God’s creation to demonstrate an eternal truth, God designed the universe for man.  Not man for the universe.  Clues, like the pyramid, the Shroud, the Tilma, the laws and ordered world of music (7 whole notes) and light (3 prime colors) screams out HISTORY.  His Story. Salvation History.

Soon to be replayed Holy Thursday thru Easter, just as evidenced in the Quaduum Cloth of Turin, the Shroud of Mystery why a perfectly happy God would send His Son to earth to be conceived and die on the same date (Cath tradition: March 25 Gregorian), as well as die (Friday the 13th day of Hebrew month Nisan) as depicted in the old and new testaments for our sins that we might live with Patrick and the other saints.  Happily.

The clues are there; don’t miss out on the party of the infinite by choosing NOT to follow Jesus the Christ.  Even a giant mountain of stones in Egypt still today screams out His glory.  As does an organic shamrock in Blarney country.  Len