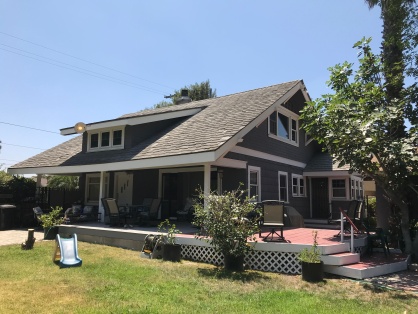 Picture of the “back” of the home. Notice 26 foot raised porch and part of the extensive decking

There’s this 100+ year old, beautifully restored, vintage home just north of the 91 fwy on Brookhurst.   It sits in a gated mini-estate surrounded by wrought iron and a powered gate.  How many memories could these walls reveal? One is of a Fullerton pioneer who changed the county with aerospace and industry.

You could call it a 50/50 estate: the main home was moved over 50 years ago, in one piece, from the Allgeyer citrus orchard at Brookhurst & La Palma.  It’s old address (10011 La Palma) no longer exists when you search Anaheim’s building records (stops at 8830 in Buena Park).

The Robert Louis & Helen Allgeyer Clark Vintage Home. Some call it a mini-estate.

This one piece transport tidbit is critical, since it was moved sometime before the 91 fwy was opened between Magnolia and Harbor circa 1956-1958.  Hard to move a 2 story under that Brookhurst overpass.

And the long time owners, Robert Louis Clark and Helen Allgeyer, are a story worth telling.

Bob came from a large Catholic family in Illinois (East St. Louis) and headed to California, specifically Hollywood during the Depression,  in 1933 at age 19.  Apparently, innovative, since he faked his carpentry skills credentials after racing to a library for a book on the subject before he got the job at Harold Lloyd Studios building props. The next day.

Two years later, he worked his way into special effects with his adaptability and ingenuity; he suggested bleaching cornflakes as snow, for example.

Soon, it was the stuff of winter for Shirley Temple’s movie “Heidi”. 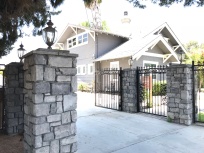 He made volcanoes erupt (useful for when his future sons had science fair projects) and buildings collapse earthquake style for other movies.

At that time, he met Helen Allgeyer, a Hollywood costume designer and, for the Anaheim/Fullerton connection, she was the granddaughter of an Anaheim citrus rancher, Charles Allgeyer; her dad was Herman Allgeyer.

The orange groves his family owned graced Brookhurst and La Palma, the site of the family ranch. 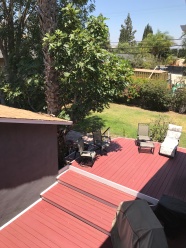 We have an 1889 picture of Herman at Orangethorpe school (1400 s Brookhurst); the name comes from the fruit combined with the Old English word -thorpe, which translates “village”: Orange Village.  Later, as many OC towns did, Orangethorpe was incorporated.  The main purpose as protection from Val Vida Cannery, which became Hunt foods on the way to Hunt-Wesson’s intrusion on their ranches.

The two homes side by side

Allgeyers; Val Vida was planning a sewer farm (1920) for the waste from their canning operations.  This did not sit well with the locals; in fact, Herman Allgeyer called a meeting at the LaPalma@Brookhurst home to build a war chest to stop the planned “sewer farm” from being implemented.  They incorporated Orangethorpe as a city in 1921 to stop the vegetable waste overreach.

Thus, Bob’s second career dawned.   He jumped in with both feet dealing with wells, 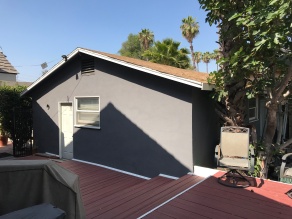 irrigation, feast and famine blight…they lived in the house that moved about than 10 years later to its current Fullerton location at 1513 Brookhurst.

After the Allgeyer Orange/Citrus Ranch was sold to developers, the family moved to a one acre Sunny Hills parcel which Bob turned into a forest of jacarandas, Monterey pines, avocados, lemon and of course orange trees (hat tip to Robin Hinch/OCReg).  His three sons, today in their 60s and 70s,  remember well, since they had to water the trees and their dad’s Cadillac every Saturday.

A people person, it seems Bob never shrunk from an opportunity to help, such as sort out water and sewer issues of the ranchers; he incidentally joined the Chamber (1955-58 is our guess) among his activities over three careers.

Something of import to many aerospace engineer retired and their descendants, Bob’s career #3 began in 1952 when (Robert) Bruce was about age 6: he got into public relations and became the industrial development coordinator for Fullerton.

His achievements included bringing $30 million in new industry, examples being Hughes Aircraft and Kimberly Clark…and land for the YMCA near the Brea Dam.

We narrowed things down, finding a listing of Robert & Helen, from a 1953 phone directory, showing them still at 10011 La Palma at Brookhurst.  The home was still on the citrus ranch, next to at least two others.

Next, we have a Jan 25, 1956 article stating after his stint with the city, Bob took a job as industrial consultant with California Bank while still on the ranch; the article stated he had solved Anaheim-Fullerton school district boundary issues and was active in scouting.  The last makes sense, since the boys listed ages in the article were Bruce, 13; Terry 7 and Kevin age 4.

Searching the archives further,  we have found out that Charles & Madonna Farner lived at 1513 S Brookhurst from a Sept 1962 directory, after finding that 1484 Woodcraft Fullerton phone number LA5-1702, was their nearby home in the late 1950s.  So, it is possible the Farners bought the home after it’s move to 1513 and the Clarks moved to the Sunny Hills area of Fullerton, widely known as the bedroom community for Hughes employees.  My dad worked at Hughes until his retirement, like so many engineers post war.

Best guess to date is the home was moved between ’56 and ’58 after the ranch was sold to local developers:  prior to the leg of the SR91 being completed across Brookhurst.  The clue is it moved up Brookhurst in one 2 story piece.

Rumor has it there were two large homes on the original ranch (including the Clark~Allgeyer home) and a third smaller one, possibly maid’s or nanny’s quarters, did not survive the 91 demolition before the Magnolia leg opened in 1958.

Helen’s dad was Herman Allgeyer, who’s own dad Charles apparently built/finished the home in 1914, just before he died, possibly with his son Herman’s involvement.  This was the same year Helen was born which is the same birth year of Robert states away.  Will it make it to Hallmark Channel is anybody’s guess.

We have pictures of Herman at the Orangethorpe school circa 1889.  Note, when Orange Village/Orangethorpe was needed as an incorporated city,  Herman took the lead in helping the other ranchers’ need to protect their families from less than desirable ‘progress.’  Unless it’s too NIMBY to live next to an industrial level ‘sewer farm’.

It appears the main house joined the 450 sf ranch house already at the 1513 Brookhurst address in the year 1957-58. Fullerton maps don’t extend that far south on Brookhurst in a preliminary search.  Since it was county land, we are consulting the county should Anaheim be able to help.

We surmise it was rotated 90 degrees so its 26 foot long porch faced the large backyard and became adjacent to the current building already on the land.  When it was on LaPalma@Brookhurst, the address indicates it was on the north side of La Palma.

Much of the restoration preceded the current owners, meticulously carried out by the Brass family we believe.  The Brasses took title August 21, 1975 from the Farner family and sold it to the current family September 25, 2001.

104 years later, it is a remarkable vintage property.  Well worth a tour.  Currently listed by Millennium 3 Real Estate for $949,000, a bargain knowing its history and the potential to accrue rental income from the old ranch house.  Don’t miss out.

Thank you for viewing!