Vox Veritas Gazette.   “The Voice of Truth” news for the Latinam challenged…

Our ace reporters attended a hastily called presser in DC soon after Amy Coney Barrett was nominated for the open seat on the Supreme Court.  Justin Tyme had the first question.  On the platform were Mrs. Nantoinette “Do as I say NOT as I HAIRdo!” Pelosi; Representative Jerry Nadler and the famous Charles Schumer, representing the Democrat Senators unable to attend.

Justin Tyme: “Ms. Pelosi, you expressed concern that Mrs Barrett has two black children.  Why is that?”

Pelosi: “Well, simple Tyme. I hate Uncle Thomasinas doing black tokenism.  The Democrat party of 1854 has a long history of taking care of black members of America.  For centuries, we provided room, board and meals for them in the South. Sure, their minimum wage was well, a minimum, but our system worked well.  Until a troublemaker with the Republic Party came along…”

Lawrence Jones:  “you must be talking about Lincoln and the 1860s.  You called him a troublemaker.  Could you explain?”

Sir Charles piped in:  “Things were working in the South in the 19th century.  Crops were grown and harvested. And the idea blacks were subjugated, like women today, is preposterous. The blacks were well taken care of; in exchange, they provided the brute labor for the southern plantation industrial complex.  That was, until Lincoln got involved.  He had this idea that blacks were human and should be free.  The rest is, as they say, history.  Well, history until we revise it back to 1619 and blame racism on the Mayflower pilgrims, absolving my amazing party.”

Lawrence: “That’s an interesting take. 600,000 people died to free the black slaves. In fact, my great, great grandfather felt a sense of freedom never before leaving his Southern plantation a free person in a great country.”

Nadler dons the microphone: “Lawrence Jones, you are such an Uncle Tom.  Minor setback that war. We just changed from plantation level, to Zoom Zoom on the move.  Carpetbaggers, from secession to segregation, Jim Crow and more.

had the blacks back and their protectors, their handlers.  What Amy C Barrett has done, is change the status quo.  You’d think having five white kids would be enough what with this huge population problem we have. When word gets out she owns two from Haiti, all hell will break loose.”  Editor’s note: Nadler waddles off the dais, rumored he had to make a deposit in the DC cesspool; maybe he dressed as a penguin when growing up and imitating a Michael Jackson walk.  Let’s be fair, he walked much better for the impeachment hike earlier in 2020

Susan: “Mr. Nadler, we don’t “own” kids.  And, today, the Dem party has substituted the plantation of their chief donor, planned parenthood, for the large Southern farms of old.  Mrs. Pelosi, are you concerned with Amy’s confirmation on Oct 30, 2020.?  Actually, I see that the Harris Administration candidate, Kamala Harris, has arrived. Could she answer this question?

Kamala:  “We will not let the infection of Trump spread to the Supreme Court.  Barrett goes to secret meetings in people’s homes, yes with masks but they sit around and pray.  What honest modern American prays to an invisible Being they’ve never seen?  Your sister paper, the Babylon Bee published evidence she eats human bodies and drinks blood from chalices.  Is this the kind of deviant for life we need?  In my home state, my associate Newsom limits these bizarre sects to outdoors; he continues to block indoor meetings to keep religious nuts like Barrett at bay”

VVG: “I believe this is called religious freedom, written into one of those founding documents that came along 160 years after 1619. And California’s Walmarts and Targets are wide open.  Why not churches?”

Harris: “Churches spread sedition and hate.  For example, my Democrat party has an excellent business partner who in fact supports my campaigns: planned parenthood.  Members of these deviant voluntary associations bully the poor hard working female lawyers and rich cougars, while PP help women.  In fact, unlike those useless cathedrals built with windows, PP has all the makings of a true human religion.  We even match the Catholics with real not fake, human sacrifice of black girls in a world where there is no room for more.  My mentor Margaret Sanger realized this, and engaged helpful black ministers to advance the PP faith.

VVG: “So you think Barrett should be Borked?”

Harris: ‘Of course! She was tied to a faith group that subjugates women; that should disqualify her.’

VVG: “But future #47 president, your Dems support killing little women at your business partner’s kill mills?! That’s not only subjugating black girls, it’s killing them off before daylight!”

Harris: “Look at it this way.  Our green science officer Alexandria Ocasio Cortes says we have 12 years.  More black girls on the planet spew CO2 day in day out; this will accelerate the world’s demise. By taking money from Sanger’s satanic sacrificing biz, we are saving the planet.  And as Ms Sanger put it, the better we get at “Exterminat(ing)e the Negro population”, the better the world free of these “useless eaters”.  Don’t worry, a few will sneak through; after all, SIECUS a la PP teaches kids to have sex at younger ages.

Schumer: “You can see our dismay with Judge Barrett owning black kids; we’ve got the Negro population right where we want them, as LBJ did bringing welfare $$ for any black family the dad is kicked out.  Don’t want them getting more rebellious members.  We own BLM Inc and Antifastan residents.  And Trump is evil; giving blacks the idea that Lincoln was right and they can be free of the slave party of 1854”

Pelosi: “Well said, Chuckie.  Covid has proven the obvious, other then I deserved my new hairdo while the rest of California women went ragged.  Nephew Newsom built up the planned parenthood satan temples sect, while he STILL keeps Calif. churches locked down.  What stooges Americans are.  The coup, the rioters, the impeachment all served a purpose to prevent the 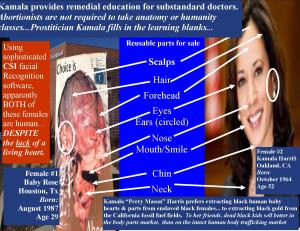 peaceful transfer of power from his honor King Obama.  We’ve spent decades legislating from the Court, owning even the Roberts and RBGs.  We don’t need RBG’s #9 seat going 5-4 for the God loving, baby protecting, hard working, Dem ignoring majority of Americans.  ACB may be a great mom of seven; but no way on the Dem owned Supreme Court.”

VVG: Editor’s note. The picture of Kamala copied here has a striking resemblance in many facial recognition points to a Houston woman named Baby Rose who died in 1987.  Of course, any resemblance to the candidate for the 47th presidency via knocking off #45 and dumping #46 is purely unintentional and coincidental.   And at her request, the California senator asked we reprint her campaign slogan showing her concern for protecting both the environment and reproductive female care: