We tend to think science is up here and religion over there.  But, is it science to be able to count how many summers one has lived, thus revealing we are 14 or 94…or in Noah’s time, 600 years then  350 years after the flood.  A lot a man can do in 950 years.

Len, you are nuts, no one could live that long.  The bible is just allegory.  Well, i may well be nuts, but is the Bible allegory when it says “I am the way, the truth and the life” or “Come follow me”?  The Bible is many things, it is a history book, a science text, a family generational recorder, filled with Jesus’ parables, lots of death and violence~ and joy.

Scientifically, using the scientific method of observation and good record keeping, the average lifespan before the flood was 907.5 years.  After the flood, through Abraham without Noah’s span (he lived long before AND after, skewing the numbers), it was 299.5 years.  1/3 as long.  Methuselah is the oldest recorded (969 years)

Noah was Adam 1 1/2; the second Adam of course is Jesus. But, it is a great story to look into.

The best theory is genetic deterioration was minimized by a world wide warm globe: global warming on steroids. No rain, remember, before the flood and the rainbow .  The world covered by a some kind of water vapor canopy.  Think of SPF 10,000, where cell damaging solar rays are filtered out, until the canopy disappears.  God designed us perfectly, but over time stuff happened.   The flood was a not good thing for the millions on the earth.

We have the scientific observations recorded in age spans.

The ‘flood’ was not just a 40 day spring rain.  Waters below violently rushed up( and came down) from above.  Continents were reformed.  Land was moved.  Mountains created.  Shell and Arco products were deep sixed, for the half brothers Ishmael and Isaac’s descendants to fight over in the Middle East in the 20th century to power their cars.

God knew what He was doing. The chart below plots the ages over time.  Notice how post flood those ages deteriorated, ie life spans reduced considerably, probably due to cell breakdown with excessive solar exposure.  It is called “aging”.  Without the protective, healthy, globally warm/tropics environment, we lost time in lifetime.  Len, you ARE nuts.

How do you explain undigested ferns in wholly mammoths in the far north if the quick freeze didn’t occur in Noah’s time?   Massive beds of deluvian (englaise: flood induced) fossils.

The animals Noah COULDN’T get on the ark today fill our tanks.  Except for LudditeLand, Sierra Clubbers and such.  I am a conservationist, not a radical environmentalist: i see humans as part, not the litter, of the environment.

Math: 7500 inches long, 1250 inches wide by 750 inches tall.  Big ship made even bigger in the movie.    Simplified that’s 4,069,010.42 cubic feet to stuff animals, eight people (the number of resurrection, renewal, rejuvenation) and food into for a couple year journey. 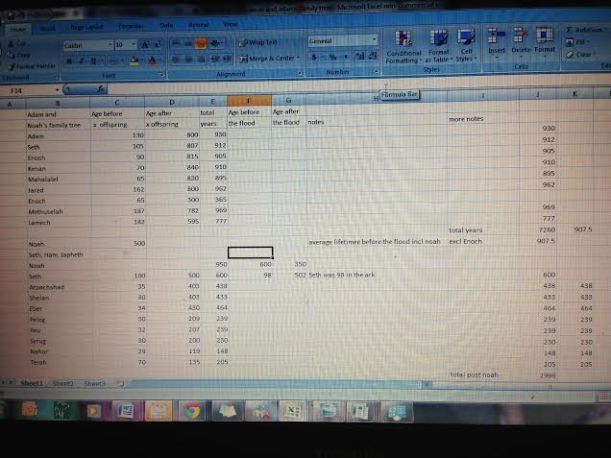 What about the dinosaurs?   The were small dinosaurs on board; tyrannosaurus junior, probably.  But, the dinosaurs did not do well in the post flood climate.

But, religion is just fantasy and science is all that matters.  That’s like asking what came first: Starbucks or coffee?  God has revealed to us His Story, history of His son.  He designed the environment for man, not man for the environment.

He started with the simple things, billions of stars, planets, plants, animals, man.  Then God went super duper and designed WOMAN.  The most complex created being in the universe.  75 trillion cells that nurtures a single cell over 280 days into another thinking, breathing 75 trillion celled human or huwoman.  A baby.  The things we kill for sport and money at kid kill mills.

But i digress.  Noah’s faithfulness kept us to live another day.  IE.  We owe our existence to his faithfulness.  Can we be any less faithful to the God of our ancestors.  He is our great…great grandfather.  His great (six more greats) grandfather was Adam.  God made Adam.

OK, evolutionists, whether 6 billion, 6,000 or 60 seconds…or even 6 days, it just doesn’t matter.  God did it.  But how about a revolutionary evolutionist, me, for you:   there are numerous places, on all the continents, where single celled organisms are being given organic nutrients in carefully controlled lab conditions.  Over about 280 days, these entities evolved into primitive, but fully functioning organisms.

Each lab manager gets naming rights for the resultant entities.  These are successful hyperevolutionary products in tune with science: repeatable, observable, hypothesize-able, beyond theory, it is law.  Babies are hyperevolutionary entities.   Let’s see you take a single cell and turn it into a human of 75-100 trillion fully differentiated cells.  Can’t?  Gee, why not?

Because you aren’t the God of Adam, Noah, Abraham, Ishmael and Isaac.  You aren’t Jesus the Christ.  So, before we blow out millennia of God’s inspired writings and 20 centuries of Catholic tradition for a religion vs science debate, remember this:

He started it all from nothing.  Nada, zip, zero.  How did He?  My scientific conclusion:  I have NO clue!!

As to Global Warming today, there is zero scientific evidence.  Over the last 17 years, less than negligible rise.  And, in colder countries, a worldwide increased could be a good thing.  What is happening, the political science climate grantees hate missing a paycheck.  So, the fraud Global Warming is morphing into Climate Change.  Hmm.  Sun Shines.  Moon Rises.  Car Goes.  Rain Falls.  Men don’t understand women.   Like all inevitables in life, climate change is a statement of the obvious.  Just don’t rob me or my family, neighbors and friends for it.   The last thing we need now is the Department of the Irrelevant Re-evaluated Redundancies section stealing more hard-earned money.  It’s bad enough they want us to pay 30 year old law student’s monthly $8 sex drug bills.

We have as much chance to impact this six sextillion ton ball of joy’s climate as a gnat slowing down a speeding tanker truck will effect his CAFE or gas mileage to the positive.  Zero, nada, nope.  And dope and rope rhyme with the last.