Two anniversaries. The modern Eucharistic miracle Terri Schindler Schiavo was murdered 9 yrs ago on March 31st, systematically starved and dehydrated to death by the American death culture.
What you may not know is God had the last word: He overshadowed the necromancers partying with(almost St.) John Paul the Great’s end of life.

God would not let the systemic killing of one of His princesses go unanswered. 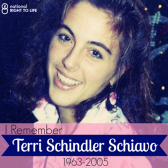 If you check Zenit and adjust for time zones, almost simultaneous to her death, JPG’s health took an unexpected and serious turn. He died today, April 2nd on the feast he loved so much: Divine Mercy. Think about this: after sundown that Saturday, after the end of the Mass, he said his last word and went heavenward. (Divine Mercy vigil). The incredible outpouring for this saint for the ages put the killer’s celebration on ice. Forever, God inextricably linked the two Catholics. The first, as a slave (Italian for slave is ‘schiavo’) and a rescuer (recall Oskar Schindler, Margaret Sanger and Hitler’s nemesis in WWII) Schindler.

Like the Christians waited until for Aug 15, 944 to place the Holy Shroud of Jerusalem/Edessa/Turin on the Divine mercy seat inside Hagia Sophia in Constantinople, it is as if JPtheGreat waited until his

favorite feast to complete an incredible life: he showed how to live a great life and how to die gracefully. don’t we often say Hail Mary, graceful?
I met with the Schindlers for 20 minutes in Anaheim a few years ago; the media was wrong. Mom and dad Schindler offered the husband/son-in-law, the million dollars to let them take their living, breathing daughter home. Recall, she was breathing and only assisted in eating. She was, like a caged animal, denied ALL food and water… 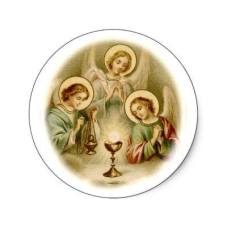 Angels around us when the Eucharist happens, and Holy Communion is given to the faithful

EXCEPT three times, Fr. Pavone gave her a tiny morsel of the Eternal Food on her tongue: the Source and Summit of our faith, Holy Communion. It’s as if what Mrs. Delehoy called “angels around us…”, God protected Terri divinely to show He is in control; no one lives without water and food 13 days, especially if you are already depleted, without divine help.
The Eucharist, only nutrition source. Note, Terri lived 13 days on only this. No water, no other food. Godincidence? Mary arrived 6 times on the 13th at Fatima. Maybe to honor her Son, who died (on the Hebrew calendar) on Friday the 13th day of the Hebrew month Nisan. You can discover this yourself via John’s Gospel and two OT books.
I believe Terri is a true Eucharistic miracle, like Lanciano and the other examples of heaven intersecting time and earthly space. She was no accident.
Scholars believe it was a bit of Scientology, a death culture JPtheGreat called it, mixed with oppression that led to this fiasco. But God’s glory shown forth. You don’t kill a woman in full view of the world, a president, his brother and others without help from hell’s kitchen.
Please remember the Schindler family. Pray for the redemption of Michael Schiavo. Stay involved in defending and saving life. Paul tells us we battle not with each other but the “principalities and powers of the darkness” Be a light in the darkness; even a tiny flame shatters it. You are a part of saving lives; nothing is more noble, nothing is more necessary.
You are loved! ~Len Beckman