It is rare for evil to admit what it is doing, is evil.  Hitler, influenced by the second most influential woman in all of human history, Maggie Sanger, used ephemisms like “work sets us free” and “Jews are not people” to get his way.  His “way” turned into killing 11 million living people, over 5 years in 10 countries.  I just found out there are a bunch more countries worldwide: 197 per Claudio.  That means woman#2, Margaret S. has influence over 187 countries, over 40+ years with a death toll of a measly, drop in the bucket 1720 MILLION as of Apr 2014.

At the 5 million a month clip, we will cross the magic 2000 million kid kill threshold in 56 months, just in time for Christmas, 2018.

Dr. Paul B. Roth, Chancellor of UNM Health Sciences and CEO of UNM Health Systems, and Dean of the UNM School of Medicine calls abortion violent! Wow! he wrote “Now that those posters are displayed in more public forums such as neighborhoods, next to schools, and along major streets, they expose children to violent images…”

Hmm. So we blame the SUV, not the driver, for the hit and run. We blame the gun, not the criminal, for shooting the innocent bystander. AND, we blame the camera for turning an image…violent.

So, Mr Roth…images of abortion are images of violence? From the mouth of the death culture to God’s ears. The Nazis said “work sets you free”; the abortionist says a camera turns a peaceful picture of a mangled child “violent” . God help us. Send us two new saints if you have a moment.  Which He did on Sunday Apr 27, 2014.

Because if the mangled bloodied baby was peaceful, the camera, iPhone etc would have recorded a mangled, but peaceful, bloodied baby.  And those poor children that see Dr. Paul’s mangled but peaceful bloodied babies need not get nightmares because mommy can tell her 4 year old it’s just a picture of peace. In fact, the truth is this: we adults, not the children, are “uncomfortable”.  But the last 17 seconds of life a child has when a mom is manipulated at a kill mill needs the truth in concentrated form: she needs dramatic proof of what instinctively she knows: she’s allowing her child to be killed by an abortogod, someone who lies to her that the child inside is an actually human child.

Sorry, Dr. Paul: you let the cat out of the bag or better posed:  You, like Dr. Mengele, who would tear apart a twin’s living body to see how it ticks using the twin’s twin as an autopsian control, destroy life.

Dr. Mengele has one up on you: he at least admits he is killing.  Your colleague, Dr. Boyd (owner of Southwestern Womens Options), where $16,000 lethal injections of full term babies with poisonous foxglove is good business, is probably closer to Mengele in honesty.  He admits on his website that he is killing human babies.

You, Dr. Paul and Egypt have a large river in common: De Nile or you are in denial.

Which brings us to this: Do we deserve a saint as great as Pope St. John Paul?  Do we have the backbone to claim him as our patron?

He risked everything to stop the demonic Nazis from killing innocent humans; this included falsified baptismals for the Jews to protect them from death.

Last I checked, only Messianic Jews believe in baptism, not the temple going orthodox variety. In the freest country on earth, in this great county, Orange County, CA, we can’t even keep three people consistently on 300sf of sidewalk at Tustin@22fwy outside the most evil corporation in human history.  The same entity that Pope St. John Paul the Great fought to stop during the last century.

The evil that believes sentient humans can be destroyed like rubbish was showcased on March 31st, 2005.   Terri Schiavo Schindler was very much alive and communicated with her parents; certainly, she couldn’t do it verbally, but then neither could Helen Keller or any dumb person.  Dumb as in inability to speak.

Yet, after 13 days of zero food and water (except the miraculous gift of the Eucharist on her tongue three times), Terri was murdered at 3pm Roman Daylight Time.

Members of the Florida strain of  Scientologists and other death merchants were prepping to celebrate their victory, killing a Catholic sister and daughter in plain sight and worldview.  What they didn’t count on was God, the Author and Finisher of Life, stepping in.   He allowed the health of Pope St. John Paul the Great to inexplicable go downhill, not slowly, but vertically within hours of Terri’s death.  By Saturday, PStJPGreat took his last breath as the Divine Mercy vigil Mass ended. This put a public quash on “in your facing” those that believed God at His Word.

The same Divine Merciful God Who offers eternal life to both abortogod and innocent children equally; He desires NONE should perish.  Even Margaret or Adolf…or Judas, atheists, agnostics and soccer moms.  God is an equal opportunity life saver.  All we have to do is believe Him at His Word and act accordingly.

How many more kids must die before we wake up?? How many more mothers’ lives destroyed, which EACH abortion does in spades. How many indeed? We can fill a 10,000 windowed building to honor the dismantling of a celebrated organ and battle for space on the beach’s sand on a warm day. But, not keep three people on a sidewalk of life.  When kids are dying, we drive idly by, flames engulfing the brick kindergarden bldg and the innocent silent screams for rescue are ignored.  Every one of us needs to be a firefighter for life.

The scary conclusion is this: we are more concerned about “comfortableness” over visuals than killing defenseless children and at-risk moms protected.  When Dr. Paul complains about innocent children being at risk from pictures of the evil work he does and no one holds him to account, then we might as well fold up our tents and go…wherever.

Who will speak up? is no longer the question. Who will be a preborn firefighter, willing to at least try to stop and help for the last 17 seconds of life a child faces as her mother is taken inside to slaughter.

And btw even though Jessie and Al have abandoned blacks to Sanger’s blood lust to kill any and all minorities, Eva didn’t qualify as such.

Eva was killed for being alive in the 40s

She was a Hungarian killed in the 40s; today, Hungary joins 187 other countries available for killing by ravenous, blood-dripping eugenics demoniacs like planned parenthood.  Why not follow the advice of a beautiful child below: “take her hand, not her life”.

The resources are there for every life to be spared, every child saved.  Every mother on the road to recovery.  ~Len 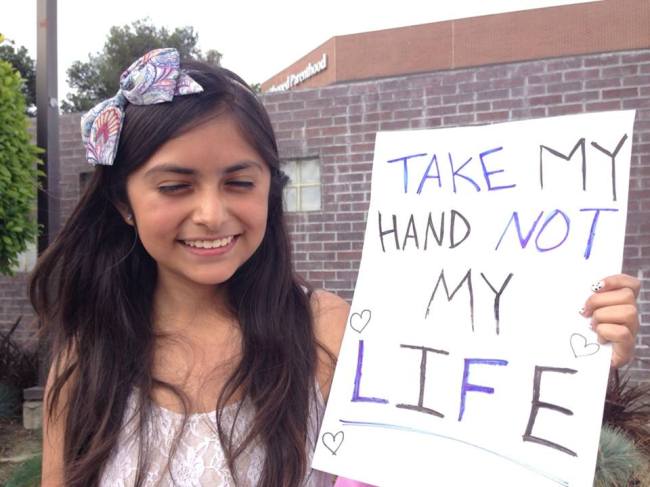