Planned Parenthood owns the Democrat Utopian party, Democrapians for short.  I used to belong to the Demo party until sometime before Ronaldus Reagan, for full disclosure.  But, the party of slavery continues to impress with its oppression that leads to runaway motherly depression.

Take Jimmy “Goliath” Gomez, who represents area 51 that includes LA for the

Most rats and snakes do as well.

Daleiden David, counterpart to Jimmy G, videoed domestic terrorists discussing how to best extract human beings inside their glass&steel alien space ships.  You might recognize some of these aliens portrayed opposite Will Smith, when he dragged one of their sorry asses across the area 51 desert floor (not the 49s wooden bench).  Extracting information from some of the footage obviously the wimp Goliath never watched:

The Spacie Alien Mary Gatter, from the Abortomedia galaxy, lusted after Lamborghinis as trade for severed human heads.  One of their earthbound processing centers, Yale Med, pays $715 for each human severed head they can get their experimenting hands on.

The Alien Dr. Amna “Whirling” Dermish from the PPgreaterTexas galactic star base desires intact human brains.  Her words:  “Dermish does not use the chemical digoxin to kill the fetus before 20 weeks, so her feet-first, intact extraction abortions are done on living fetuses. Using ultrasound guidance to manipulate the fetus from vertex to breech orientation before extracting the yet-living fetus is a hallmark of the illegal partial-birth abortion procedure (18 U.S.C. 1531).”

Super Alien Deb “Nukethefella” Nucotela prefers salad, wine and living babies out prior to severed heads before beaming to alien headquarters in space.  Keep the kid’s head from crossing the birth canal finish line before skillfully sliced and severed, sold and shipped.

This stuff is pure evil and couching it in ‘aliens come to earth, beam out living humans for their labs and plan to kill all humans’ might seem like fiction, but their actions are real.

Will Smith’s nemesis wanted the total eradication of human “vermin”.  planned parenthood just wants 1/3 of humanity gone.  58 million Americans.  1.875 BILLION worldwide is their progress report.  These are incredible numbers that should make any thinking American like Jimmy the Goliath sick with remorse.

From the space alien Dermish: “My aim is usually to get the specimens (or speciwomen, my edit) out pretty intact,” “Especially the 20-weekers are a lot harder versus the 18-weekers, so at that point I’ll switch to breech.”   wouldn’t you just love this demonic bitch as your OB or pediatrician?   Oops, sorry about the wording: it should have been diabolic bitch.  She’s complaining the damn kids keep growing and make her hellish work tougher; discusses severing kid heads like she’s talking about sliced turkey for Thanksgiving.

Jimmy Goliath is fine with this; he fishes Lincoln Heights, helps black teens never get jobs and oh yeah, prostitutes himself for his handlers in planned parenthood owned Moonbeam Country, a governor who used to be Catholic and Jesuit influenced.

Instead, Goliath doubles down and tries to squelch the whistles at the mouth, ready for the blowing, using patriotic Sacorruptionmento legalese.

Unless it involves “human trafficking”; then it’s ok to do what David did: video the truth.

CLN continues: “As has been frequently demonstrated in the past, by news media and private individual and organizations alike, undercover investigations, or those done in open and public spaces, are sometimes necessary in order to expose little known truths and to uncover important facts that our society deserves to have disseminated for public review and debate.”   Candid Camera, TMZ…and discovering evil.

Point is, other serious crimes also merit the same type of exemptions, proving this is a naked attempt to stop whistleblowers who catch the truth for the record by a recording.

Planned parenthood is scared.  They are calling in all their markers and cashing in all their prostitutes.  Like Jimmy Goliath Gomez and his hench people Santiago and Jackson, who directly attacks the First Amendment for their crony capitalist’s domestic terrorists hiding behind “health care providers”.

Gomez: PP provides zero health care; they are a money laundering operation for

substandard surgeons who can’t get real medical jobs.  Paying $305,000 to an OC doctor who slices off kid’s heads is atrocious.  It is ALL blood money.  As the 30 year old  “talking head” Rose above points out, she’d like the same chance at life that Jimmy the Goliath is enjoying.

Unfortunately, he is bought, paid, shipped and sold to the highest bidders at planned parenthood,  “severed head central” because he lacks character and integrity.  Something in very short supply for the band: “Moonbeam & the Lowbeamer Legislayers”

Looks remarkably like Dr Mary Gatter without the Lamborghini, wine and salad

Last images:  Jimmy should note, the alien in the movie is very much like you and me, made out of fragile biologics held inside a protective and ambulatory sturdy outer biosuit.  Kind of like a human mother and child.  Separate entities but co-dependant.  Both living.  The diff is both mother AND child are very much alive.

Once i tell you this is just Hollywood, and the alien being and his suit, you probably calm down a bit.

But the “talking head” i quoted from is very much a total human female that was abducted in 1987, not in Jimmy Goliath’s area 51, but near the NASA Houston space center.  Her body was disposed of as medical waste but this picture was taken first.

She is NOT a Hollywood audioAnimatronic creation, but a created being of the Living God no different than Jimmy “Goliath” Gomez’ wife or daughter, or Moonbeam’s or even Ann Richards who bore Cecile to lead the most evil corporation in human history in the known

Baby Rose died in August 1987 at PP in Houston Tx.

Jimmy G, this woman IS real; she died near the Houston Space Center in August of 1987. Her life and death is documented, unlike Will Smith’s alien above.

Ironically, Baby Rose is the oldest photo still in the pro-life mainstream who can trace her endings to Houston and PPGulfCoast.  Talk about history repeating itself:

True to form, people earlier this year from Texas’ PPGC or Devon Anderson illegally tipped California AG Kamala Harris with Harris County grand jury testimony.  This form of interstate prosecutorial commerce is blatantly illegal, abuse of power under the color of authority since Gjury testimony MUST be kept under wraps.

Just because Kamala shares the same name as the county doesn’t justify her illegal actions, burgling with her 11 armed goons KamalaGate style a whistleblower’s Irvine residence; she directly or indirectly violating up to 8 civil bill of rights amendments.  Then she left behind exculpatory evidence by purposeful omission of the evil middlewoman Kate Dyer of Stem Express. In the videos you are “squelching”, Kate barks out she needs 50 livers a week.  Now, looking back to my high school biology, humans have only one liver each so Kate is putting a contract killing out for 50 humans PER WEEK.  James Bond, phone M.

Kamala must resign her Senate bid and her role as attorney general for abuse of power under the color of authority, and other violations.

If Moonbeam signs the AB1671, Jimmy Goliath should be ashamed of his sorry self. And resign himself while he still has his tattered soul intact.  This bill has zero to do with basic confidential communications: just corrupt baby killers who cash in black babies like they are harvestable cotton.  $715 a head probably beats California lettuce and a bale of southern cotton.

“Consent Payment” is PPese for baby heart or liver.

Whistleblowers are protected by the same federal laws outlined in UofTexMed purchase orders that were matched to PPGC invoices acknowledging free shipment for $150 each baby parts. Charge for the baby heads or hearts; ship for free.  Not the PP party line.

Jimmy G, the writing is on the wall.  Though the wall can only be read from heaven, know that character is defined by what we do when no one is watching.  Trust, when you are sleeping tonight, that God is not happy with you protecting demons from the light by suppressing the truth.  And that picture of baby Rose is remarkably similar to what your daughter would look like after her “Hotel California”.

She could walk into planned parenthood, at any of their 7 LA area kill mills,  inside your wife and like the satanic hotel subject of the song, never leave.  Except by forceps after her ISIS experience by sharp surgeon knives.

AB 1671 was drafted to protect the demons from the light.  Congratulations.  You have helped them succeed.  Power corrupts, Demo power corrupts absolutely. 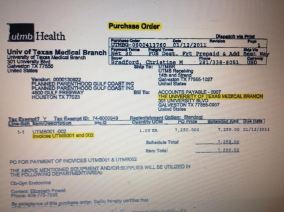 FOB Destination means Free On Board for TexMed.  PP lied as usual. They sell the parts & pay shipping