The Dean Mr. Chemerinsky (law dean, UCI) has nightmares worrying about a tied 4-4 court and 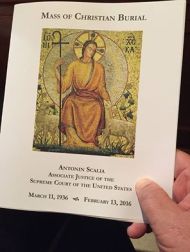 obsesses with filling the loss of one of the best originalist Constitutional jurists, Mr. Scalia.  With a Christmas decorative Garland, no less.
He’s saddened there will be “a significant number of ties…” this SCOTUS term. Math solution is simple: Ruth Ginsberg should step down and this will re-unbalance the court.  Mr. Scalia died either of two ways, natural causes (blame God’s timing) or nefarious means (poisoned, no autopsy, quick cremation etc.so blame man) leaving this voting quandary. We will never know; but this we do:

Ruth showed she’s too old facing sanity issues and dementia, to be unbiased in her recent words:  “many medical procedures, including childbirth, are much more dangerous to patients, than abortion.”   Yes, she actually said this.
She compared a ‘newdead’,  the death of one vulnerable patient every time to a term baby and routinely injuring moms, which happens before severed black heads are (documented) sold to YaleMed for $715 each (without a dermatologist license).
But, Dr. Ruth may be planned parenthoodlum’s main

“even” SCOTUS up again.
What an idea; just make sure you have a fire extinguisher nearby for her combo retirement and 83 1/2 birthday party in October.
As to power separations, should we mention in June, Ruthie publicly calling Trump a “faker”, interfering with election of the executive branch’s executive.
While she’s been a ‘fakir’ of death.
Being biased is human; i just admit it. The Dean, unfortunately likes to come across as a balanced Constitutional scholar trying to save the founding document. Dr. Erwin flails too much about one branch unsurping the powers of the other two: his diatribe “omits” his fave leftist, FDR’s actions.  But, the Dean is quick to level charges at the obfuscatory Senate.  They HAVE voted on Garland: they don’t want him.  And the Dean doesn’t like the answer.  Yet….the Dean NEVER mentions the Novus Wheeler Dealer.
On Feb 5, 1937, FDR unveiled legislation expanding the court up to 15, including giving him the right to nominate one more for any SCOTUS judge older than 70 1/2.  But, his packing efforts failed when the Democrat Judiciary committee chair, Henry Ashurst sat on the bill.  His words:  “No haste, no hurry, no waste, no worry—that is the motto of this committee” (hat tip WikiP) .  Frankly, Erwin, many of FDR’s New Deal programs WERE unConstitutional, but that ancient document never holds you back. The Deal might recall, or check WikiP that FDR did score a Pyrrhic victory later on in packing SCOTUS with YesMen, but that has nothing to do with separation of powers.  Hmm
Ashurst did not want FDR, like Obama, to overpower SCOTUS with his henchmen; Erwin,

be a good leftist Democrat, and push for Ruth’s retirement party early October.  Ruthie just turned 83 1/2 on Sept 15 and waiting until the ides of March 2017 is way toooo long; God owns the hour glass, not Ruth, not Scalia’s possible killer and its time for her to enjoy her sunset years.
Ruth still has opportunities, though Ruth Buzzard’s role is gone.  She could still work for planned parenthood’s litigation department, full time, and do significant bad.  And of course, we will never know what

WASHINGTON, DC – JUNE 26: U.S. President Barack Obama leaves the podium after delivering a statement after the U.S. Supreme Court ruled that same-sex couples have a constitutional right to marry nationwide, in the Rose Garden of the White House, on June 26, 2015 in Washington, D.C. On Friday, President Obama is traveling to Charleston, South Carolina to deliver the eulogy at the funeral service for Rev. Clementa Pinckney. (Photo by Drew Angerer-Pool/Getty Images)

would have happened if Scalia remained on the bench to this day.  You can’t autopsy the ashes that well.

But if you are looking for a vote, how about a vote of confidence:
one person in particular voted with his feet by NOT attending the celebration of Life pictured above.  You might recognize him from a back side view in the shadows of the SCOTUS building.
~~~~~~~~~~~~~~~~~~~~~~~~~
Thank you Ruth for your service.  Enjoy retirement.  The Dean, continue your odd ways.  Sadly, our CalTax dollars are spent on your efforts.    len