The Aztecs were real amateurs compared to our modern sacrificial priests.  At their most productive, one in six Mexicans were sacrificed by these Aztec priests to the serpent god,  Quetzalcoatl.  As his name indicates, “a feathered serpent, a flying reptile (much like a dragon), who was a boundary-maker (and transgressor) between earth and sky. He was a creator deity having contributed essentially to the creation of Mankind.”

Montezuma’s (who feared Cortez as his nemesis) temple at Tenochtitlan was the main predecessor of planned parenthood; the floor was thick with blood and sacrifices, sometimes as many as 80,000 continued daily to the Aztecs gods.  Typically, they would cut out a beating heart for their rituals; today, when abortionists, who took over the ancient Aztec practice, take out a baby’s heart, it is harvest and shipped for cash.

Mexico’s sacrificials  Until, in an answer to Aztec prophecy, Hernan Cortez, dressed in black for Good Friday, 1521, arrived and eventually repurposed Mexico City, the common name of Tenochtitlan, temple to a Catholic church and Mass after purification.

175,000, thanks to Cortez’ missionaries, the Franciscans who marched barefoot from Vera Cruz and others, became Christians/Catholics over the next ten years.  If you were at St Anthony Claret about 4am, you would have seen this:

This morning, at any of the other thousands celebrating Las Mananitas and Mass, you would see many of their descendants celebrating something that happened today, in 1531:  Our Lady who “crushed the head of the serpent”, spoken in the Nahuatl language (of the Aztecs)

Mary appeared to Juan Diego where the female goddess, Tonantzin, was worshipped, replacing a fake goddess with the Mother of God.  The next 10 years, saw 9 million more come to the Catholic faith. Why so many?  So many of the Hispana people in the Southland know a little bit about or revere deeply Mary.  Her frequent flyer trips are worldwide but this one “apparition” or image of Mary is the only one with a maternity belt: she is expecting a child.

In the past, I have put together 80 slides/images with text in English to help those of us Spanish language challenged; but Our Lady’s story in Mexico is adventurous and fascinating with a young peasant blessed, a disbelieving bishop Z, and a real miracle THAT ENDURES IN REAL LIFE TO THIS DAY.

Come on, Len, do you really believe this?  Actually, I do as do millions and not just our Mexican brothers and sisters.

When Mary replaced Tonantzin as the rightful queen of heaven at Tepeyac, our Lady focuses as she always does on her son, Jesus.  What’s so miraculous about the image anyways?  My protestant and Muslim friends have different opinions of Mary, the ever virgin mother of God, but the almost 500 year old piece of cactus cloth (life expectancy normally 10 years) is pristine, the image crisp and the story timeless.
One important feature discovered in recent years due to super computers, it is the actual star chart of the night sky of December 12, 1531.  When you plot the stars on Mary’s “cloak” against the constellations 486 years ago that night, you see a 3D representation that spoke louder than words or the classic a “picture speaks louder than a thousand words”.  It still does.

The constellation Virgo (the virgin) rests over Mary’s heart.  Mary has always had a heart for her “husband” the Holy Spirit and her Son, the Xavier (not to be confused with Xavier Becerra, a ‘modern Aztec Priest in Life only Catholic’ who believes killing kids, black, Mexican, white or ? is AOK.  The Savior, misnamed at birth, is our NorteCalifornia attorney general.

Speaking of Jesus, the constellation Leo (the Lion of the Tribe of Judah) rests over her 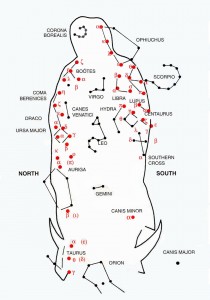 womb.  The maternity belt around Mary’s waist signifies she was pregnant with Christ at the time and it was no accident that constellation, created before time, and others are in the positions they are.  Notice the graphic.  The red dots are the stars in Mary’s cloak, with the adjacent constellations labeled.  See Virgo and the little bump Leo?

Imagine the effort that went into the constellations, over time and the progression of the equinox to get to that point on Dec 12, 1531.  Hernan Cortez’ exploration, and arrival; his native Extremadura, Spain and the companion miracle appearance of Mary to another humble peasant, a sheep herder at the beginning of the 14th century, who dug up as directed, a statue of the Virgin Mary tradition tells us was carved by St. Luke.

Salvation history, is His Story, and it is as much a multidimensional weave as a serial series of events.   Everything is the Guadalupe image spoke to the Nahuatl peoples in THEIR OWN language and understandings.  The native gods and goddesses represented in their regal deity colors and symbols, resting on the half moon and the cherub/angel; imagery, showing Mary comes to explain with mercy the better way.

So many things to cover, but google away: Mr Turley tells us science is NOT the enemy but confirms the miraculous nature, like the hidden treasure revealed:

“Rather than explaining away the cloth, then, modern science seemed to confirm its mysterious reality. Take for example, the unanticipated 1981 discovery that the arrangement of the stars on the image resembled that which astronomers were able to say was the configuration of the night sky over Mexico on 12 December 1531 – the day of the apparition; or, the equally surprising 1988 finding that when a map of Mexico was placed over the image it revealed an uncanny conformity to the iconographic and geographic elements shown on the map.  Stranger still, the relic seemed not only to speak of earth and stars but also to ‘sing’. In 1979, a mathematician discovered within the image a golden ratio and was able, with the arrangement of the symbols within the image, to produce a musical notation. The image of Guadalupe appears not only to reflect the heavens but to sing to them as well.”

The poor Aztec convert, Juan Diego, ran away at first but Mary kept her promise: his uncle was cured on Dec 13th and great things began to happen.

When he obeyed, picked and took the out of season Castilian roses in his tilma/cloak, and dumped them at the feet of Bishop Zummarraga, His Story continued.  The story of the Christ, from all and to all eternity, was emblazoned not with paint but with the hand of God.

Mary, God’s mother, was merely the messenger as usual, the excellent Jewish mom, almost saying “Oy ve, believe my Son.  He knows what He’s doing and is talking about”.  As if, at Cana, telling the servants to do as He tells you. where Jesus signified the importance and sacredness of one man one woman marriage for all time with His first miracle.  Or Mary, comforting the so many oppressed throughout the world.

Mexico is a great country; too bad, due to economic mismanagement and the drug cartels fueled by American upper class and everyday’s dependence on cocaine and other non-therapeutic drugs, 25% of the country has relocated north, leaving the land barren and subject to MS13 and the Corleones south of the border.   The 30 million here, leaving mexico a wasteland for the satanic pharmacologists, will not end until we stop the destruction of the Mexican family IN Mexico, as dads and their eldest sons “abandon” and head north, leaving the rest of the family easy prey for the local gangs throughout the land of Tenochtitlan.

This is not a political problem, but a heart problem.  Mary introduced her Son to the indigenous peoples of Mexico and they responded by the millions; she helped to replace Aztec sacrifice with the bloodless daily sacrifice, still occurring today in the Basilica of Mexico City, we know as the Mass. Our Lady of Guadalupe is the virgin of hope, now the empress of the Americas.

Like my Muslim friends who revere Mary as the ever virgin, my Mexican friends, Catholic in the main, still look to Mary’s Son and His mother for many things.

The image is more than a rearview mirror hanger or image on a coaster: it tells us, in no uncertain terms, that Divine Mercy is available to all who reach out and recognize Jesus, the Son of Living God, as their Eternal Saviour.

Learn the rest of the story; happy to send you the backstory of the Nahuatl’s recognition of the real focus of faith.  For example, Sandra Weaver tells us:

“The Mesoamerican god Quetzalcoatl and his twin brother came into being through virgin birth to the goddess Coatlice. Find the real story hidden between the lines. This Mesoamerican deity has been worshiped at least since the time of the Olmecs. Kukulcan or Ququmatz were the Mayan names.”  Where else have we heard of a virgin birth, a Child wrapped in swaddling clothes lying in a manger.

My sister Dr. Mary, brilliant molecular biologist, claims to be atheist, was born on this date as was named in honor of the mother of God.  I wish her the same hope Paul and Irene had for her: that she realize just how much God loves her and she is loved by Mary, her namesake and her extended family.  Trust me, all, the feathered god, Quetzalcoatl, will NOT be there to greet you as you die.  Unless, you are heading to the serpent god’s lair, where temperatures are unbearable forever and longer, never ending living with the devil and his lieutenants.

God bless you as your day dawns and life continues. DO NOT ignore the pleading of this dad of 11, who, yes Claudio, numbers many Mexicans as friends before you were born, and Muslims who seek God in a different way.  “Know the truth and the Truth will set you free”.  Even the most recent presidential candidate was searching for the truth, and please pray for God’s mercy on her soul as subcorticol vascular dementia continues its onslaught on her body.  God desires ALL come to Him.  As He is; not as a serpent or sun god, but as the Creator God with NO beginning; and like you and me, NO END in the future, at infinity and beyond. 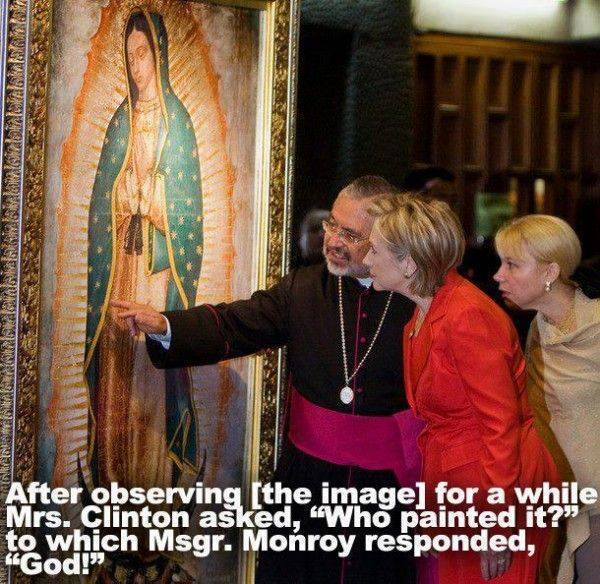