NYC & Nursing Homes.  These are the two top epicenters of Covid19 AND anomalies, at the same time.  Sardine cans, where people are packed, well like sardines, makes SARS-Cov-2 smile and do its worst.  As well as that godless beast who used the ignorant Chinese Wuhanians as Petri dishes, as incubators, before sending the Plague of Xi by ChinaCovid Air flights to Italy, Spain, USA etc.

Should we release the private sector to walk about the cabin, as the airline ad puts it?   Well, the actual mortality rate outside of the city-nation NYC and nursing homes is about .1%, better than the flu.  Isolating healthy people prevents herd immunity and HELPS the SECOND WAVE this fall.  Tons more have had it already, before Scarf Doc and Dr. Faschi started their daily fear fests.

Read on.  I can prove, as you know intuitively, other than the rabid regressive left, it’s time to open the private sector.  AOCD, the disease of Alex Ocasio Cortez, believes people should riot and 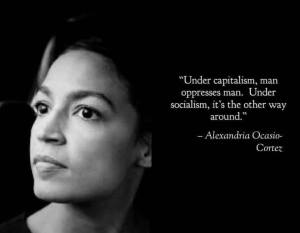 Don’t let the Plague of Xi beat us worse than it has.  As the wisest skull in Pelosi’s harem of hysteria, AOC puts it well.  “Under capitalism, man oppresses man.  Under socialism, it’s the other way around”  Uh, phone up DEMentia China Joe. He’d love that line

NYC is row after row of 40, 80, 100 floors. A million on the Square. Packed at the corners.  Take the stairs?  Sure. 100 floors in a can within a can, the elevators.  50 people packed on the buses and  subway sardine cans.  In fact, people are fleeing the Rotting Apple in droves because the urban social justice warrior planners thing Dense is Divine.  But, we now know it is diabolical under the Plague of Xi because the virus is super contagious.  Flu is down, way down in many places.

Ever hear of a nursing home?  It’s a cultural phenom, the place where the abandoned elderly go to die.  It used to be slower, but look at the first real epidemic Epicenter before it became known as a PAN (worldwide)DEMIC, in  In the old days, your 88 year old mom would stay in her home until God calls her home or she moves in with one of her many kids.

As a three decade real estate guy, many clients get to that point where decisions must be made about keeping mom in her home. Before we sell it to get the funds so mom can live in a senior living or nursing home, think about this.

A friend gerontologist says it best while safe to keep mom and/or dad in their comfortable environs, their home.  Believe it or not, it keeps our elderly parents alive a lot longer.

I have 11 kids, I know a family of 13 and many more average 6, 8 or more kids.  Sounds like the farm days where the kids were needed to harvest the hay to feed the cows to milk for breakfast and market.  No, its part of the ReAlignment, the Revolution of Love, where kids are valued not impediments to mani pedes & gym time.

But, as a homeschooling parent of 11, this virus hunter sees the reality: 2 kid families are fine, but it kills our elderly unnecessary.  Intergenerational families are God’s design; the elderly should be valued as part of and WITH the family; their wisdom & grace desired in the home.  Today, DINKs and DI2Ks are the main, but not for long. Dual income NO kids (with Prius & a Shitszoo) or Dual income 2 kids are fine choices, but this Covid is forcing revolutionary re evaluation of what is important.  A script I give to harried moms with four kids at the supermarket check out counter has kernels of truth

Especially when the Plague of Xi is unleashed on an unsuspecting world.  Herd immunity works great on immune strong kids, but not the abandoned elderly two feet apart in nursing homes.  There, as the Kirkwood, WA Life Care Center proves, it is herd viral slaughter. 75 of 150 died when a worker brought Covid to her work.  Huntington Beach, Florida etc are NOW finally mentioning this reality.  I know we have been busy dealing with the Plague of Xi, but we MUST do what a better governor, DeSantis did: full court sanitation press for ALL nursing home and senior living facilities in his state. It works.  We should have known this since the Life Care Center outbreak, but late is better than never….AND more dead elderly

In Taxifornia, we generous tax payers provide $720,000 per each 40 kid classroom (PER YEAR) to spend as Cal Ed Inc. pleases.  Just as sure as global warming sets in at dawn after a night of local global cooling, Newsom the Modulator’s fave unions, teachers and ed, Cal Ed inc wants more $$$.  Class size MUST be 10 kids; no longer 30 or 40.  Six feet apart.  And $720,000 just won’t do. Don’t say i didn’t warn you, the gimme gimme hands out there is coming.  Worse than it is now.

But, the reality is, every one knows of whole classrooms being epicenters of the flu or measles, chicken pox et al and massive absences.  I have 11 and there was a 5 1/2 month period where our homeschool passed the flu around. Truth be told, the classroom model is so Dewey ancient, believing that the best education is institutionalizing the kids.  It isn’t.  Not everyone can homeschool, but that too, is a choice.  With the cost of childcare and after school care, sometimes both parents don’t need to work.  It’s all in deciding “Are my kids worth the extra care and learning” that actual home based education offers.  But PLEASE don’t think 40 million kids are new homeschoolers.  Forcing families to distance learn so the public ed gurus can keep their fingers on your kids and IN the home is NOT chosen homeschooling.  A subject for another Chronicles piece.  don’t worry Cal public & private super(intendent): millions won’t take the better road but go back to whatever the new institutionalized classroom becomes.  Too many parents are just NOT happy when their kids are looking at them after 8am 180 days of the year.

Moms tell us to: wash with soap. Disinfect counters.  DON’T lick doorknobs unless sterilized first. ISOLATE if showing symptoms of cold, flu or Covid. QUARANTINE if actually sick. MASK up when outside BUT not 24/7.  Jen Horn is right. We don’t want this mask thing to become the new normal. 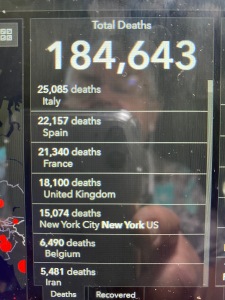 Take out the anamolies: NYC is #5 in the WORLD.  It is it’s own country and NOT a good model for the other 50 states.  Look at the picture from Apr 23 2020.  NYC is STILL 1/3 of the US total deaths and has MORE deaths from Covid19 then ALL the WORLD’s countries but five.  Any good forensic or medical statistician would toss out the whole Rotting Big Apple, not because the people aren’t precious, but it makes for bad modeling and real solutions.

With nursing homes, DR FASCHI AND SCARF DOC: COUNT THE NUMBER OF DEATHS FROM THE HERDED ELDERLY IN NURSING HOME.  We need less racism counting and more real data.  You don’t CONTAIN the Covid19.  You AVOID it and KILL it.

TAKE these two epicenter profiles out of the model and the time to open the private sector from their shackles is TODAY.  Why?

BECAUSE WE DON’T HAVE TO LIVE LIKE SARDINES IN NYC (WHICH IS EMPTYING OUT) AND NURSING HOMES.

Do the DeSantis Sanitize and maximize sanitation and precautions in nursing homes; the elderly are the jewels of America, not the Soylent Green herded to early death.

Have lots of kids so you won’t be abandoned to a DeSantis or NYC nursing home.  America has the blessings to keep grandma at home not set up for early death.

Consider homeschooling if you can. EVERYONE can, but it takes an open mind.  This panic crisis distance learning is a scam; the parents are stressed BECAUSE their kids are with them (something this 30 year homeschooler sees as a social and familial good.

Stay blessed, sanitary and safe.  The Virus Hunter thanks you, with sword of Truth at his side and a quiver of arrows of hope at the ready.  Humbly, you ARE a blessing.  Tell someone else the same.  The amazing stories continue in the greatest land on God’s green earth (Not AOCD green)