Vox Veritas Gazette.   “The Voice of Truth” for the Lingua Latinam challenged… 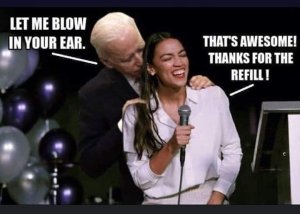 Born on the 62rd anniversary (Oct 13) of the SunDance festival in Fatima, Portugal witnessed by 70,000 people, Ms OC represents the 14th New York district in the House of Representatives.  One of her most famous successes was the BezoBashOff that prevented 3000 new employees and billion$ in just another invasive non-native business, an Amazon Fulfillment Center, moving into her district.

At her recent presser, AOC demanded justice for the historical documents emanating from the Ultimate Patriarchal Racist. Her term for God.

In a Catholic news article portraying an Instagram post this August, Alexandria Ocasio-Cortez pointed to a statue of St Damien of Molokai as an example of “patriarchy and white supremacist culture”. She blames God’s mysogynistic portrayal as His racism run amok.

AOC argued that “when we select figures to tell the stories of colonized places, it is the colonizers and settlers whose stories are told — and virtually no one else.”

She then highlighted Hawaii’s memorial to Fr Damien at the U.S. Capitol’s National Statuary Hall Collection and, after suggesting Queen Lili’uokalani of Hawaii should have instead received the honor, she said the Catholic saint was an example of “who we are taught to deify in our nation’s Capitol: virtually all men, all white, and mostly both.”

Our reporter caught up with AOC as she and her live-in lover left their Washington pad carrying the ripped out garbage disposal unit.

VVG: Ms AOC, we understand you believe St Damien is a white colonizer miscreant and that Catholics, Hawaiians and God have no right to honor him?  You saw Bishop Barron’s video?

AOC: I did.  Just another white guy with a collar.  Look at Damien; He is white from head to toe, terrible complexion any Valley girl or trip to Saffora would cure

-In fact, he’s more white than most whiteys.  His whiteness, i discovered, rubbed off and he caused other Hawaiians, known for darker skin, to become colonizing whiteys.  And obviously, he didn’t use Clearasil and take care of his pimples: look how big they got.

VVG: Ms AOC, you are aware St Damien had leprosy?  And he sacrificed his life to help the helpless, the hopeless and others no one would get within 6 feet of, with or without a mask?

AOC: That’s no excuse for him to put on white face; I saw a photo and he looks like Peter Faulk as Colombo, another whitey.  In fact, he took over the Leper colony on Molokai just to oppress the people. He pretended to help them learn how to live with their whiteness, instead of recommending they become black or like me, LatinaX.

Just like I said: just another patriarchal white supremacist colonizer.

VVG: Ms AOC, you ARE aware he is well loved in Hawaii? He asked his bishop for permission to help the Molokai colony; it was filled with those no one would come near to, so much he caught the incurable disease and died 16 years later?

AOC: “My point, exactly. He deserved to die. Whiteness IS an incurable disease that rubs off on others, with only one solution.  And since God has shown He prefers white supremacist saints instead of Black Lives that matter rioters, I think God should be banned from society as well.

AOC: God obviously loves whiteys more than blackies or Mexicalis and other different races.  Otherwise, why would His Son be always pictured with White Face?

VVG: I’m no theologian, Alexandria, but God created just ONE human race.  Superficials like colors are accidents of genetics; there was only one set of parents and chances are they had olive skin in the Middle Eastern region.  God did not make one first white couple, one Negroid, one Asian, one New York Italian Cuomo couple.  Just one man and one woman who became nine billion.

AOC: NO WAY!! God only made a male and female?  What about the other 158 genders?  My God, err my whatever, He’s a transphobe, homophobe, white supremacist for sure!

Her live in lover looked fatigued holding the heavy InSinkerator in his hands.

VVG: Fancy that, AOC. God didn’t create 160 different human types, nor dozens of ‘first couples”.  God says He loves ALL human beings but He does have a few rules, suggestions and commandments.  Like don’t kill off the kids He sends to earth inside moms.

AOC: We gotta go.  I want to hock this useless noisemaker; still don’t know what a garbage disposal is. Never had one in NYC.

VVG: That’s because the sanitation unions wouldn’t allow them in the buildings.

VVG: One last question: you do know that science has discovered a cure via sulfa drugs for leprosy, so no one needs to die from the terrible disease anymore.

AOC: That is good news, IF…  It CURES whiteness?!  I’m gonna add sulfa to my green new deal bill.  I wonder if it eliminates orange presidents as well?

VVG: I don’t think so, Alexandria.  So, you don’t subscribe to the science that we all come from the same first parents, and the color of our skin is not as important as the character of our hearts and minds?

AOC: Of course not!  We Democrats need to divide and conquer, not unite and arise.  Without the race card, we’d have to think and reason and make up stuff.

AOC: Now you get it.  But can we trust you won’t reveal that Kamala is NOT African-American.  Her mom is Asiatic Indian and her Stanford Prof dad brags about his Jamaican ancestors had the biggest slave plantation on the island.  How do you say “Howard Brown” with a straight face.  Kamala and diminishing Joe are putting the IDP in Identity politics as firmly as one thinks possible.

Once Biden is inaugurated, we can apply sulfa if needbe; but we want  to move Biden out of the Oval Office using Rod Rosenstein’s fave 25th amendment as quickly as possible.  He’ll be older on his first day than Reagan was on his last day in the White House.

Then, finally get President #47  Kamala Harris, a black woman, to run 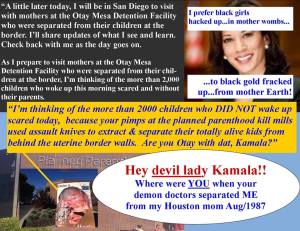 things. Her mantra will be the goat (Greatest of All time), the bong though she did imprison potheads while toking away herself:

~I am Dem VP candidate Kamala Harris the Anointed, and I approve this message.

VVG: Kamala never seems to finish any of her terms, whether as District Attorney, AG or senator. She’s always just waiting on her next gig.  Ms AOC, aren’t you concerned the enemy will pull out the sex and color cards?

AOC:  If they bring up sex, her age 29 adultery sessions with 60 yr old Slick Willie Brown will be seen as her crowning glory.  Oh you mean female.  Hmm.  As to being a woman of color, white has ALL the colors of the rainbow and black is the absence of all of them; i’ve never understood this color wheel mentality my party engages in.  So as silly this preoccupation with hues really is, we will confuse them more.  We will color of sex shame them into submission.  You know how whimped out Republicans get…

AOC: It’s about time you deplorables figured it out.  Meanwhile, maybe I can get BLM or Antifastan emigres to pull down St Damien and replace that diseased Whitey with my statue.  I certainly deserve one in the hall…if i can just pawn this weird food processor that was built into my kitchen DC sink, I can start a GoFundMe campaign for AOC the Magnificent.

VVG:  Good luck with that.  Any other priorities?

AOC:  Since you asked, I’ll push to paint the people’s house a bright shade of black.  It’s been the White House for waaay too long…after all, color IS more important than character.  Ever hear of MLKing and his “I have a dream” speech?   Gotta go.