The TRUMP sign erected on private property was laid to rest due to increasing concerns it posed a fire hazard.

King Newsom the Lesser, in his daily Crayola 4 press conference, discussed the need to have Cal Trans take down the sign.

VVG: Your eminence, King Newsom, why did you have a full crew of CalTrans workers dismantle the privately owned TRUMP sign?

Newsom: “my venerable newsbusters, were you not aware of recent wild fires in California?  It posed an immense fire hazard!

VVG: “O great King, you mean it was a major distraction to 405 fwy drivers as they raced past the TRUMP election advertisement?

Newsom: “Come on VVG!  You know the average speed is between 5 and 12 mph.  If I used distraction as the hazard excuse err reason, you would lampoon me mercilessly.

VVG: “WE understand.  You have distanced yourself from Auntie Nantoinette Pelosi, the “Do as I say NOT as I Hairdo” hair to the throne.  Why fire?

Newsom: “If you must know, two reasons.  We felt God would strike the sign with His lightning; during the Covid19-29, we haven’t had non-satanic worship in California since we’ve kept little human sacrificing as essential operations to please the freedom of religion crowd.  Plus, you know the official Democrap party position, that “Do no harm to BLM~AntiFAstan peaceful protestors” when they wield their Molotovian cocktails, of fossil fuel and Trump flag strips wicks.  We saw evidence high profile members of the Hollywood BLM~AntiFAstan union would act.  But, as you know, I control the media, that is ABCNNBCBS.  Million$ of dollars of damage this week at LA Police HQ and by the usual stifling the truth in reporting, no one knew AntiFAstan immigrants rioted”

VVG:  “How is that, o King 4 Life.  meaning you will be Taxifornia’s king as long as you live.  NOT that you stand up for protecting life, like little black girls from being harvested and sold in parts.”

Deniro was found wandering Hollywood & Vine muttering “F@$@$^$k Trump” repeatedly. He was taken in for a 72 hour hold

Newsom: “Cute, VVG.  It was obvious, in wildfire season, we knew it was unremoved wildfire tinder; Madonna had her “F$%^&%^k America” sports bra, drenched in flammable vodka at the base of the T.  Nearby, stood former actor Robert DeNiro mumbling ‘F%^@%$&#^*k Trump’ carrying a Bunker Biden signature gas can.  Yes, it was full as he poured it on the “P”  You conservative conservationists keep complaining woman induced climate change is a hoax and when we clear the white alphabetic brush, you complain more.”

VVG: “uh, your worshipfullness, forest management is not tear down the largest Trump sign. Just like wildfires and black slaves reparation, you misdirect”

Newsom: “I’m the Magician.  Yeah, you despots call me The Modulator for the seriously fake way i say “Covid19 will be here until 2050; bummer how you caught on there is no GREEN in my Crayon Box of California citizenry house arrest.  GREEN means Go as in you are free to move about the cabin.”

VVG: “You sure, your royalness, the actors weren’t just drunk or on the set of a movie? The fact it was on private property, no one gave you permission and on which you had no right to trespass on.  Bogus was the traffic hazard claim;  do you realize we have laws and order in this country!?”

Newsom:  “i AM the law in Taxifornia and don’t you forget it!!  Anyways, once we had the crew of 100 CalTrans workers on site working on it, the usual 3 workers and 97 supervisors, it was laid down and the actors taken away”

VVG: “So, no issues of suppression of political speech or trespass? What did you do with the actors?”

Newsom: “Actually, no; who’s going to believe you guys anyways in Demofornia; as to the actors, we had a virtual blast at a Hollywood Hills that Mayor Garchitty had commandeered via eminent domain for partying.  Masks parked at the door, of course.”

VVG: “Zounds of your 25th amendment invoking Auntie Pelosi screaming “Do as I say, NOT as I HAIRDO!”

Newsom: “You pegged it; every 40 million serfs or surfs, you need a few hundred slave masters.  Been the same since 1854.  Once the letters were laid down, the Twin Liars Poker players Jessie Smollett and Adam SChitty Schiffty noticed the letters looked more like the Cyrillic alphabet!  Opportunity knocked….Russia! Russia! Russia! Adam immediately called your aunt Nancy at the hair salon and arranged a presser for later this afternoon.

She was busy laying out the 25th amendment regarding the ‘Impeach and Beat 45. Dump 46. Bring in Prez Kamala #47’ strategy to equalize the separate powers.  After all, Trump STILL has NOT ascended to full power because Hillary’s snowflakes are still crying and wandering the Hollywood 101 Fwy since 11-9 in 2016.”

VVG: “Wow!  I can see why the Maryland mansion occupant Adam got the idea; the letters are identical to the Moscow~DC translation. I’m sure we will cover Adan and this in our Early Edition.   But a presser? For what purpose?”

Newsom: “I thought you were journalists!?!  Why, to open round 2 of Maximum Water on the Brain’s  Impeach45.  Adam was in town for the first time in years at his one bedroom 600 sf condo on First Street in Burbank; he could swear this was the smoking gun that his fake Bob Ukr phone call transcript didn’t hold a candle to.  The lettering appeared to be a message to alien Russkie UFO spacecraft signaling to Medeved on open skies, things will be easier for Putin as promised once President Biden is elected Nov 3rd and President Kamalalalala installed over Biden’s senile body on July 4th 2021.  Great way to celebrate the demise of 45 on the 145th birthday.”

VVG: “Ahh, the Brown Bedroom to the Lincoln Bedroom in 27 years candidate!  So, packing the Supremes wasn’t the issue then. What was it about innocent tall letters?”

Newsom: “That bastard James Woods.  He threatened to tear down the BIDEN BROWN BABE and BLM signage near the TRUMP lettering in REPAYrations for political suppression.

This is why i signed in AB3161 to pay back any 165 year old Southern Democrat black slaves roaming our state. We have more $money$ waiting for them even as wildfires rage and public pensions groan.

Newsom: “Some conservative paper you’all are.  Everyone knows we harvest ballots and many Democrats vote early (NOT Eric Early), often and the best way: Dead!  All their caretakers need to do is dig them up and prove they were slaves; since their bones probably aren’t intact, their families need to bring them to Sacramento to the Reparations tent outside my mansion.  No mail in applications will do: we want positive identification.  This is more important than voter ID which blacks are too poor to have or too dumb to know how to get.

VVG:  “RePAYrations too? Gives new meaning to the adage the slave party of 1854 votes early, often, harvested and dead.   Then how do they collect their $1619 REPAYment checks?”

Newsom: “We help the Republican freed black slaves vote Democrat for the first time; anyone can write an X in Harris/Biden slot”

VVG.  Ohhhh my!  By the way, what Biden or BLM signage?  All we saw was very tall TRUMP and ant-sized Cal Transients from our VVG chopper!”

Newsom: “My point exactly. usually paints the NYC and DC towns’ streets in huge yellow NOT red; we didn’t see the signs Woods was talking about”

VVG:  “Neither did anyone else… It’s almost as if Biden isn’t even campaigning; where the hell is Hunter while all this spit polished Trump kids work hard.  No one notices any sign Biden is even alive!”

Newsom: “This presser is over.  Gotta get to the Hollywood Hills party hearty.  I heard Madonna and Hanna Cyrus Montana are doing a duet on “Screw the USA”.  Twerp city. 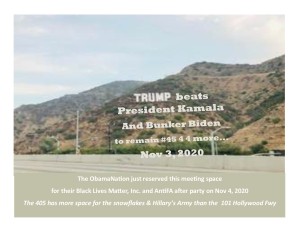 Such is life…the left will continue to be misery merchants, selling a new pile of doo doo daily

James Woods couldn’t be reached for comment.  He was too busy doing excellent Twitterverse work on HypocriSEE USA.