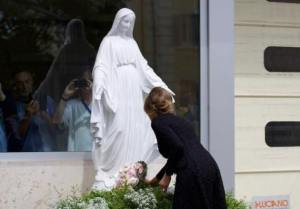 May 13, 2021  A fateful, faith full and special interconnected day this year, with anniversaries of Jesus’ Ascension, Mary’s Fatima appearance, a ripple of a president’s assassination attempt reflected 43 days later with the same for a beloved pope St John Paul the Great.

Speaking of 43 days as important, many places, last Sunday was celebrated as Ascension Thursday on Sunday.  At the Abbey, the homilist called it Ascension ThurSunday, i guess like a TurDucKen dish.

Here’s the scoop: 104 years ago,  at 5:13pm, the Virgin Mary appeared on the first Fatima day: may 13, 1917, to Lucia, Jacinta and Francisco at the Cova in the city named by a Catholic prince for his Muslim convert to Catholicism wife: Fatima.

As you may know, Mohammad’s oldest and beloved daughter was named Fatima; an the Islamic scholars see Mary as #2 to only Fatima. God bought Mary tickets purposefully to that Portugal city in 1917; want to hazard a guess?

40 years ago to the day, John Paul the Great was shot at 5:13pm (or 17:17 per UPI) while leaning over to look at a 12 year old’s miraculous medal.  The bullet from Agca the Assassin was one inch to a major artery serving the pope’s abdomen.  Miracle YES!

“When the Pope passed through an adoring and excited crowd of supporters, Ağca fired four shots at 17:17 with a 9mm Browning Hi-Power semi-automatic pistol, and critically wounded him.”  Wikipedia does the play by play, but who guided the Bulgarian assassin squad to that precise day and time 63 years after Mary’s Fatima premiere appearance?

It is intriguing how, throughout time, which is nestled in the middle of eternity, God leaves amazing living landmarks, special symbols and concrete clues.  God set that mysterious Catholic compass/altar/beacon at the exact center of the world, with all of its salvation history references; we know it as the Giza Pyramid.

Some are organic in the guise of humans He created, such as the Eucharistic miracles (like Terri Schiavo Schindler in 2005)

Some say that Mary’s trip in 1858 to Lourdes was mainly focused on physical healing; but her trip in 1917 to Fatima was for the spiritual healing of the world and opportunity to hear a true peace plan.  If only we had listened.  Like the apostles at Jesus’ side in the Garden of Death of Gethsemane, we couldn’t stay up even for an hour.  Or honor the prophetic requests of heaven.

God is the same, Jesus is immutable, death is inevitable.  Look how we are so weak about keeping dates: we no longer celebrate Jesus’ Ascension universally on Thursday.

His mom’s day, the Assumption, remains on August 15 (possibly analogous to His rising on 15th of Abib/Nissan on the Jewish calendar), but not with that clear 40/10 (40 days after Easter, 10 before Pentecost) split.

People of God:  did it rain for 43 days and nights in Noah’s time?  Were the Israelites in the desert for 43 years?  Is our Lent and Advent 43 days?

Forty (40) has always been the biblical number for probation and testing;  Jesus was tested in the desert for 43 days?  No, 40.

Why must we, in our laziness, change such an important Church landmark? Especially with Pentecost coming up…  yet, one of the greatest presidents in history, Ronald Reagan was shot on March 30, 1981, but lived; Pope John Paul the Great, now a Saint, was shot four times at close range 43 days after the President…and lived.  Yes, both miracles!

63 years after Mary told the world of the need to pray and consecrate Russia to her Immaculate Heart (the same heart a muddy ignorant St Bernadette at Lourdes on March 25, 1858 identified theologically as the Immaculate Conception) the prophecy about “killing” a pope occurred.

We did not obey and another war (wars, per Bishop Sheen, are judgements) commenced in 1939.  6 million Jews among 12 million killed over 12 years in 10 countries by gas and bullets; not to be confused with the 66 million Archbishop of St Francis Cordelone mentioned were murdered in America over 47 years.  66 million, enough to replace 33 states total populations, all little kids, babies, fetus  WHATEVER label you give the thumbsuckers, they are all still HUMAN.

And we STILL listen to Orwellian Newspeak of the corrupt and demonic Democrat party regulars of slavery who are enriched laundering money through these satanic surgeon kill mills.

From the Vatican archives, here is Sister Lucia’s secret 1&2, the prophecy translated:

What of the 3rd secret?  On July 13, 1917, the final “secret” Fatima revelation involved a Bishop dressed in white (a Pope) who would be shot (40 years ago) and left for dead; here is part of the commentary on May 13, 2000, the occasion of the beautification Mass in Fatima for Jacinta and Francisco (from the Vatican archives).  And look to the Swiss Guard’s photo below:

Mary’s prophecy of a bishop in white who was shot, took place 766 months later to the date, after she uttered it in Portugal. That same pope stood in the cell of his assassin and forgave him; the bullet resides in Mary’s care in her crown.  Regina Coeli, the Queen of Heaven.

This FatimAscension message rings true today.  Our country is facing much evil; the rise of atheistic socialism, even within our colleges by corrupt professors is one example. But God remains in control.  100 million souls died under Stalin last century.  NOT to mention, 2.2 billion abortions occurred worldwide.  In fact, in America, 63 million babies did not make it to birth due to hell’s hold on the minds of America.

But the gospel of this May 13th tells the story in the signs: before He was taken up into heaven, our Savior spoke these words:

“Go into the whole world
and proclaim the gospel to every creature.
Whoever believes and is baptized will be saved;
whoever does not believe will be condemned.”

The message He left to 12 members of the ONE human race, our founding Apostles.  There are NOT 12 first couples, but ONE male and ONE female the Creator began our journey with.  No matter how nutty the Regressively corrupt try to invent science and make golden calf type false scientists for us to follow.

Simple formula: no need to debate endlessly over which religion or sect, denomination or temple is true.  Wonder why I believe it is important to be living witnesses to the Word, the Gospel, to our homeschool buddies and coop partners, our workmates, our kids and our siblings: ALL our human neighbors?  Simple answer:

Time is short; at most, we live 100 years or so.  Eternity is long: draw a circle (six feet wide of course) and start walking on it.  When you get to the end, you will understand eternity.  There is NO end to a circle OR forever.

Time IS urgent for us to be prepared; help our neighbors know Christ and be ready for life today and forever day after tomorrow.  If the Giza Pyramid can point to Christ, as His mother Mary does every time she visits, think maybe we can “proclaim the gospel to EVERY creature”.

We live in the Time of Miracles: don’t doubt it!   Live the miracle your life is in the midst of.

Believing in a happily ever after works in fairy tales; it works EVEN BETTER in real life.  Choose Christ and the Father will CHOOSE you for His forever.